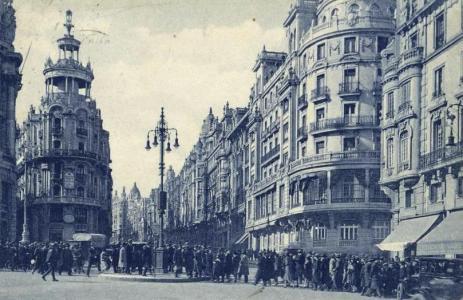 One hundred fifty years ago in December 1868, the first traffic light in the world was installed in London outside the British Parliament of Westminster.

Using railway signals as a reference, rail engineer John Peake Knight designed the first traffic light used to control traffic. Its design consisted of two vertical arms with two gas lamps which were operated manually by a policeman. During the day, when the arm was upright it meant “go”, and when it was in horizontal position it meant “stop” and at night, gas lamps were used with the color green for “go” and red for “stop. A few months after its installation, an accidental explosion seriously injured the policeman in charge of its operation and the traffic light was removed.

The growing need to control traffic due to increased use of various types of vehicles and the resulting traffic congestion led to the recovery of the traffic light at the beginning of the twentieth century. The evolution in the installation of the first electric streetlights allowed the invention of J.P. Knight to be adapted with a safer, electric design. Thus, the world's first electric traffic light was installed in Cleveland, USA in 1914. The first one in Europe was installed in Berlin, Germany, only 10 years later.

In 1926, the company SICE (linked at that point to General Electric, owner of the traffic light patent) installed for the first time in Spain a “streetlight with illuminated signals to regulate the circulation of pedestrians and vehicles" which we now call a “traffic light”. This first traffic light was installed in Madrid at the intersection of Calle Alcalá and Conde de Peñalver (today Gran Via). At that time this was one of the most complicated intersections in the city, so it was no coincidence that the main concessionaires: Citroën, Fiat, Renault and Chrysler-Seida, were located there. By then, the color yellow had already been incorporated into the design of the traffic light, warning drivers of the next color change.

Given the widespread ignorance of citizens regarding the meaning of the traffic light colors, newspapers were used to communicate traffic regulations insistently and teach drivers and pedestrians when and how they should cross.

Over time and with the advent of new technologies, traffic lights have evolved into what we now know as “smart traffic lights”. Of course, today’s traffic is managed from a control center with specialized software made up of complex algorithms capable of regulating the flow of vehicles. But centralization has not diminished the relevance of the signal itself. In fact, SICE has already run the initial tests, giving it the ability to communicate with vehicles via 5G network, alerting them of the presence of pedestrians at crosswalks or the traffic light’s current state in the case of blind turns.

One hundred and fifty years later, the traffic light continues to regulate the world and its use is universally known, ensuring that circulation is more fluid, comfortable and safe for both drivers and pedestrians.