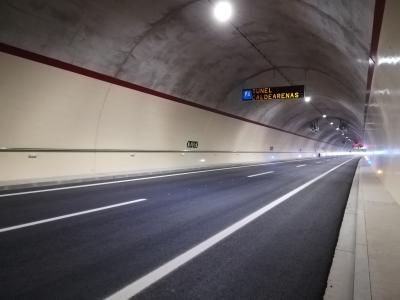 Last Thursday, March 21, three new tunnels managed by the SIDERA software, a platform developed by SICE, opened to traffic on A-23 (Monrepós). The SIDERA-OP platform currently manages and monitors 10 tunnels from the Tunnel Control Center in Monrepós.

The Caldearenas tunnel, which is 2,997 meters long, is the second longest in the province of Aragon, behind that of Somport. Located on the Alto de Monrepós-Caldearenas stretch, it has opened to traffic in the Huesca a Jaca direction of the A-23, giving continuity to the Arguis-Alto de Monrepós section. This tunnel, in addition to being equipped with the most innovative safety equipment on the market, stands out as the most complex of the ten tunnels managed by SICE’s SIDERA Open Platform management system of the Monrepós Control Center, from which a total of 12 kilometers of tunnels are operated.

The implementation of the Monrepós Control Center Platform represents a very unique project for SICE. Its main feature is the difficulty of integrating tunnels from different suppliers and field technologies, with PLCs and ERUs from different manufacturers, all under the same control platform, allowing at all times the exploitation of the tunnels, both from the local SCADAs and from the superior SIDERA-OP Platform in Monrepós.

Its execution has been a great challenge for SICE due to the great diversity of participating companies, as well as the lack of uniformity of the facilities caused by the absence of a standardization that covers all the equipment, systems and communication services already in the tunnels. The work also needed a phased-commissioning, as the project was divided into two stages: stage I, in which the existing tunnels were integrated and stage II, in which the new tunnels were integrated. In spite of these factors, the company has managed to solve all these difficulties by successfully carrying out the full integration of all the systems in a single control center. SICE is now one of the few companies in the sector with this experience.

In addition to centralizing the management of the above-mentioned tunnels, SICE has carried out the control, communications, signaling and security installations of the Caldearenas tunnel, as well as all the control and security installations of the Escusaguas tunnel. The company has also updated these facilities in the existing Monrepós 6 tunnel (609 meters long). In order to achieve greater robustness and safety, a local control management system has been included in each of the tunnels. Thus, SICE has carried out the local control system of the M6 and Escusaguas tunnels from the SIDERA-OP platform (SIDERA Open Platform software based on Wonderware), while the Caldearenas tunnel is operated locally from the SIDERA platform.