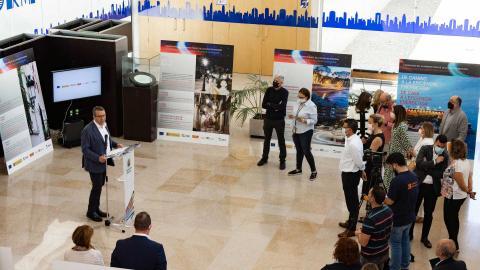 Benidorm Town Hall has launched a project to renovate the city's exterior lighting, an action which has allowed, in its first phase, the renovation of 80.14% of the 3,410 existing light points in the downtown area. The aim of this intervention is to improve the energy efficiency of the municipality, thanks to the reduction of carbon dioxide emissions from street lighting, as well as to achieve economic savings for the municipal coffers. This is the first step on Benidorm's path towards the Smart City, which provides greater intelligence to this type of public services, with the aim of interconnecting them with each other to move towards a more sustainable development.

The renovation of the public lighting in the municipality has been carried out by Sociedad Ibérica de Construcciones Eléctricas, S.A. (SICE), and partially financed by the Spanish Institute for Energy Diversification and Saving (IDAE), attached to the Ministry for Ecological Transition, and the European ERDF Funds. The project has been carried out in three stages. In the first, the existing luminaires have been replaced with LED technology lamps; in the second, equipment has been installed to monitor the lighting points; in the third, a centralised remote management system has been implemented to monitor the status of the installed equipment and to regulate the intensity of the lighting points individually or by groups.

The environmental benefits of this project include a 79.94% reduction in the electricity consumption of the refurbished installation, which will prevent the emission of 723.27 tonnes of CO2 into the atmosphere each year. In terms of municipal savings, the City Council has gradually reduced its expenditure over the last decade, however, with this project further progress will be made in this area. In terms of aesthetics, it is possible to regulate the lighting levels according to timetables, types of roads and specific needs.

The Benidorm Town Hall today opened an exhibition to publicise this project to the public. The event was attended by the mayor of the city, Antonio Pérez Pérez, who explained that for the lighting points that have been renovated, a series of luminaires have been selected to suit the lighting required in each space, adapt to the regulations and maintain the aesthetics that a tourist city like the capital of the Costa Blanca needs.

The remote management system installed allows each installation to be controlled point by point, with the aim of checking each light individually. Thanks to this system, the lighting network can be supervised, controlled, measured and managed globally, allowing incidents to be detected, located and resolved more quickly. Remote management makes it possible to know the status of each luminaire in real time, allowing any anomaly to be detected and informing the maintenance services of the incident in the luminaire. In addition, the control means that the lighting levels and installed power can be controlled according to the needs or time of year.

The entire project has also been divided into three major interventions, corresponding to the Centre, Levante and Poniente areas of Benidorm. The first intervention has just been completed with work on 2,733 light points and 54 control centres, which means the renovation of 80.14% of the 3,410 existing light points in this area, and which allows the reduction of the installed power from 441.20 kW to 119.53 kW, with the consequent energy and economic savings, without reducing the levels of lighting perceived by the citizen.

In streets with road traffic, road luminaires have been installed; in the historic centre of the city, classic luminaires have been installed to highlight the aesthetics of the area, as well as in parks and more representative areas where ornamental luminaires are located. For open spaces such as auditoriums, floodlights have been selected. All the models are adapted to the urban environment where they are located and offer the advantages of energy savings, the possibility of variable remote management by time and day, festivities, etc.

SICE sponsors the Python project: the bioconquest of space