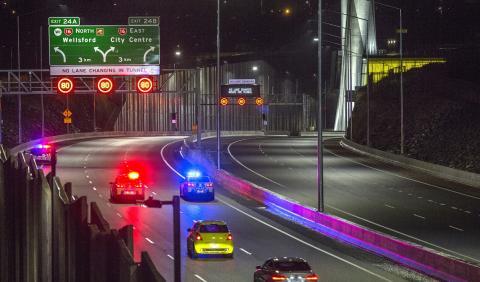 It’s been three years since Waka Kotahi New Zealand Transport Agency opened the Waterview Tunnel to traffic in the early hours of the 2nd July 2017. The opening marked the culmination of work that started almost six years earlier and saw nearly 10,000 workers achieve one of the largest milestones in NZ roading history, comparable to the Harbour Bridge 60 years ago.

The Waterview Connection is the most challenging infrastructure project to date and the longest road tunnel in New Zealand. The project is part of the Western Ring Route, involves a 4.8 km six-lane motorway connecting Auckland’s Southwestern Motorway (State Highway 20) and Northwestern Motorway (State Highway 16) and includes the 2.5km double bore tunnel all managed by SICE’s in-house SIDERA OMCS solution.

After the thorough testing of all security systems got the final tick in early June, the people of Auckland enjoyed a unique opportunity to walk or cycle through the newly finished piece of infrastructure.

The opening day just confirmed how high the public interest was: 80,534 transits through the tunnel were registered, a number that wouldn’t be surpassed until November. “Since the tunnel opened, we have seen more than 73 million transits, getting over the 100,000 transits in one day on 12th December 2019”, says Emilio Marquez, SICE’s Alliance operations manager at Waterview.

As part of the Western Ring Route, the Waterview Connection provides a second route through Auckland, bypassing the city centre and reducing the reliance on State Highway 1 and the Auckland Harbour Bridge.  The redistribution of the city’s travel demand allows the motorway network to more effectively absorb incidents such as breakdowns or crashes in peak periods. It’s also taken the pressure off local roads, improving journey times for shorter trips and public transport.

To ensure the reliability and safety of the tunnel and the motorists who daily drive through it, a team of 50 people is operating and taking care of the tunnel 24 hours a day, seven days a week. Since opening day, this team has put together more than 350,000 working hours to make sure road users had a safe passage through the tunnel and its surroundings. In three years, the team has attended over 7,000 road incidents, ensuring the safety of all road users and helping many people to solve small vehicle issues.

To help this team and the proper functioning of the tunnel and its maintenance, the state-of-the-art tunnel control system (SIDERA) is a fundamental tool in their day-to-day work. This advanced Traffic Management Control System monitors and controls all the roadside equipment - around 3,300 devices - and incidents. SIDERA and its advanced tunnel ventilation strategy have saved more than 6,500,000 kWh per year, avoiding the equivalent to the emission 4,596 tonnes of CO2 per year, helping to meet sustainability goals.

SICE wins an ITS Australia National Award for 2020