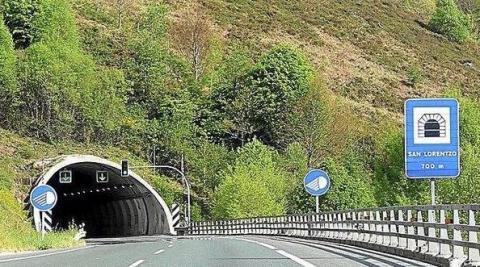 The San Lorentzo-Larre tunnel, which opened in 1995, is located on highway A-15 (Navarra – Gipuzkoa Highway) and is part of the trans-European network. The 793m long twin-tube tunnel allows unidirectional traffic flow in its two lanes, in both directions. Since its length exceeds 500m and in compliance with European Directive 2004/54/EC, it must meet a series of minimum safety requirements to ensure a minimum level of safety for users who circulate through it.

At the time of its commissioning, the tunnel had a series of facilities managed from the Belabieta Control Center. Since then, the existing facilities have been updated and managed, since 2010, from the Roads Management Center of Gipuzkoa located in Miramon.

The last actions have been the fiber optic connection of the Belabieta and San Lorentzo-Larre tunnels with Miramon, as well as the renovation of the entire ventilation system of these tunnels.

Between June and November 2018, reinforcement of the lining and the adaptation of the installations in the tunnel with direction to Pamplona was carried out.

The works consist, basically, of:

The project includes, among others, the following actions: stabilization solutions, renovation of the drainage, adaptation of the power supply installations, resizing of electrical equipment, updating of the lighting system with LED technology to reduce the operating cost, reinstallation of the ventilation system, and inclusion of a fire protection system consisting of a network of hydrants and a dry riser within the tunnel.

In addition, cutting-edge technologies will be incorporated to update the road management, manage traffic and gauging, improve the CCTV system to install an Automatic Incident Detection (AID) system, improve the user communication system by renewing the SOS systems and including a public address system.