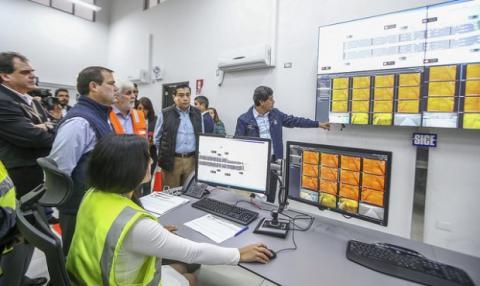 At the end of last July, the Peruvian Ministry of Transport and Communications concluded the trial run stage of the Gambetta Tunnel, officially beginning the final operation. The tunnel, located in Callao District, in Lima, has three lanes and three lanes back, as well as a central berm for future systems of rapid transport or rail.

Aiming at ensuring the highest quality standard in terms of road safety, SICE has equipped the Gambetta Tunnel with an intelligent ITS traffic system based on the SIDERA software platform, which allows remote control of both the electrical and electromechanical systems (ventilation, fire-fighting system and lighting) within the tunnel. SIDERA provides system operators with an interface where they can view, in real time and with the aid of interactive and sketch maps of the facilities, the status of the equipment and the evolution of the incidents.

In addition, SICE has also implemented the engineering, supply, installation and commissioning of electromechanical systems, ITS, Medium and Low voltage electrical systems, and fire extinguishing systems with an overall length about 2.5 km of a two-tiered road each one with three lanes, where a 960 meters twin-tube tunnel has been equipped.

The tunnel, which connects the 200-mile oval with the port of Callao, will pass under the future landing strip in the Jorge Chávez international airport that is expected to be built as part of the Lima airport expansion project. The new infrastructure reduces travel time and makes vehicle circulation flow better on router between the port and the Pan-American Highway, easing the displacement of more than two million people living in the Cono Norte.