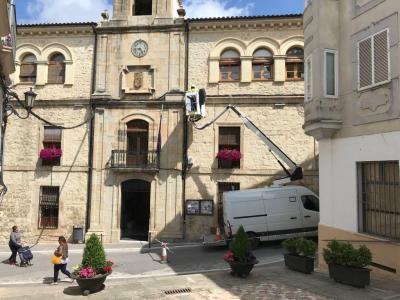 Within the Pluri-Regional Sustainable Growth Operational Program, “A way to make Europe”, for the 2014-2020 period, the Government of Jaén has launched different initiatives to promote renewable energy sources and biomass, as well as lighting efficiency. One of the initiatives that has picked up speed is the optimization of the street lighting in the towns of Jaén. This is evident in the 10 contracts to renovate the street lighting facilities that the Regional Government awarded to SICE at the end of 2019, which will be implemented over the first months of 2020.

Through these initiatives, Jaén will renovate most of the outdoor public lighting of 77 municipalities with under 20,000 citizens, prioritizing elements that are more inefficient. The works to be developed include the replacement of over 40,000 lighting points, as well as necesarry changes in the structures of existing streetlights, control panels, and control switches. Furthermore, SICE will implement a remote management system that will result in a higher quality service, simplifying and reducing the maintenance cost of the services. This will bring about a significant technological boost to all the municipalities involved. With all of this, it will seek to improve the citizens’ degree of visual comfort with a particular focus on improving the regulation of lighting levels using telematic upgrades.

Additionally, the actions to be carried out by SICE will reduce carbon emissions by four tons of CO2 per year, according to most recent estimates. Furthermore, the reduction in electricity consumption in the cities benefitting from this initiative will range between 78% and 80%, on average.

This project joins the list of successful contracts carried out by the company in recent years in the province of Jaén, among which we should highlight the Energy and Maintenance Services of public lighting of the city of Baeza, a city declared as a World Heritage Site by UNESCO, and the modernization of the city of Mengíbar, with the installation of new electric vehicle charging stations, which makes SICE a benchmark in Energy Efficiency within the province.