SICE participates in Seminar on improving road safety through ITS 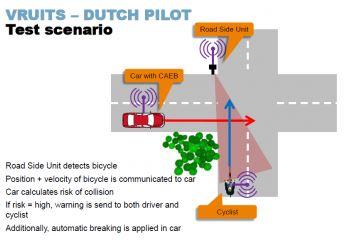 The VRUITS project sponsored by the European Commission, aims at providing recommendations regarding ITS applications for the improvement of the safety and mobility for Vulnerable Road Users (pedestrians, cyclist, motorcyclist). In the seminar the VRUITS partners and attendees discussed how ITS can be used to improve cycling safety. At the end of the seminar the participants visited the VRUITS Helmond test site. In this site was shown how vehicles and bikes can “communicate” with each other. Thus, vehicle drivers receive warnings of possible collisions with cyclists and the vehicle brakes automatically using an electronic break system (EBS) to avoid the collision. Likewise, cyclists are personally warned for collisions.

Within the same line of integrate the “vulnerable users” into the cooperative systems (I2VRU) that are deployed on equipment and ITS systems, SICE is working to equip Urban Traffic Controllers with the capacity that allow them to deploy cooperative services (C-ITS) following European standards as CEN ISO TS 19091, based on the American standard SAE J2735.