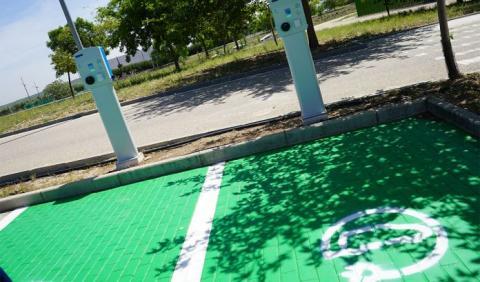 Spain has almost 5,000 public charging points for electric vehicles. And despite the fact that the greatest concentrations of charging points are in cities with the highest population density (Barcelona, Madrid, Valencia, etc.), the least saturated provinces are also “getting moving”, committing to clean energy and energy efficiency.

This is true of the Province of Jaen, which now has almost 50 charging points for electric vehicles, two of which were recently installed in the Science and Technology Park in the municipality of Mengíbar. Located at the entrance to the site, they are managed through a simple mobile application.

The mayor of Mengíbar, Juan Bravo Sosa, and the councilors Miguel Ángel Sedeño Molina (New Technologies delegate), Adela Pérez Alonso, Sergio Bolívar López and Pilar Medina, as well as municipal workers and representatives of SICE (the company installing them), attended the inauguration and launch of these charging points for electric vehicles. During the proceedings, the mayor, Juan Bravo Sosa, said that “we at the Council are working for a second charging station, but in the center of the municipality.”