Opening of the WestConnex M4 East tunnel between Parramata and Homebush 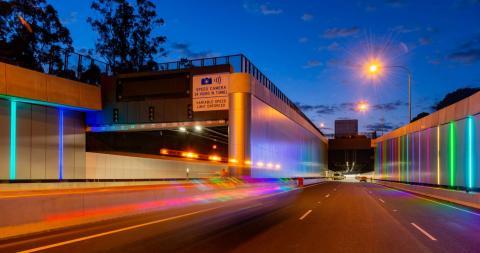 Last 12th of July, the new tunnel on Sydney's M4 motorway linking the suburbs of Homebush and Haberfield, was opened to traffic. This tunnel, consisting of twin tunnels with three lanes in each direction and a total length of 6.5km, is an extension of the M4 motorway between Parramatta and Homebush, as a part of the WestConnex plan – Australia's largest transport infrastructure project. It has created up to 4,000 new jobs, and will help to decongest traffic in Sydney and reduce surface truck traffic.

As part of this ambitious project, SICE has implemented its renowned Operations & Management Control System Software (OMCS) SIDERA platform, which is already in operation in more than 2,500km of roads and more than 300km of tunnels around the world.

This is the first tunnel of the WestConnex scheme to open to traffic with the remaining stages (M5N, M4-M5 and Rozelle Interchange) schedule to open between 2020 and 2023. One of the unique features of the WestConnex project is the Integrated OMCS (IOMCS) system that will allow the control of all the stages of WestConnex from a unified OMCS system once the M4-M5 link is operational. This state of the art system will provide an integrated and safer operation while reducing the ongoin costs.

SICE has also been selected by WestConnex as the preferred provider to deliver the IOMCS system based on SICE’s SIDERA OMCS.

The SIDERA system delivered on the M4E tunnel not only controls and integrates all the plant and equipment in the M4E tunnel but also the ITS equipment previously installed on the M4 West section and that opened to the traffic in late 2017. The integration of this equipment in SIDERA will allow for a centralized management of M4E and M4W via SIDERA.

In addition to the development of the OMCS software, SICE has played a significant role as the lead ITS designer and system integrator. Furthermore, SICE’s team has worked against the clock to design, procure, integrate and commissioning the following systems: the communications network, PLC network, emergency and fire telephones, video surveillance (CCTV) and Automatic Vehicle Detection System (AVIDS). Also, SICE has done the design and integration of the following systems: tunnel closure, over-high detection, vehicle detection, and C2C interface. Finally, SICE has programed all the PLCs that manage mechanical and electrical systems and that ultimately integrate in the unified Graphical User Interface (GUI) in SIDERA.

During the peak times of the project, SICE had 70+ engineers working in Australia and Spain to deliver the different components of the project under SICE scope.

After the opening of the tunnel, SICE will continue to provide maintenance and support services until 2026.

With the opening of M4E, the SICE SIDERA system is already in operation in three projects in Australia, two tunnels (T2E and M4E) and a motorway (InterLink – M5W), and one tunnel in NZ with four more projects currently in delivery phase (M5N, M4-5M5, Rozelle Interchange and WestGate) which positions SICE as the market leader in OMCS systems for the Australia and NZ markets.