Antequera receives the Sustainable City Award for its work in Energy Efficiency, thanks to a modern lighting system with point-to-point telemanagement 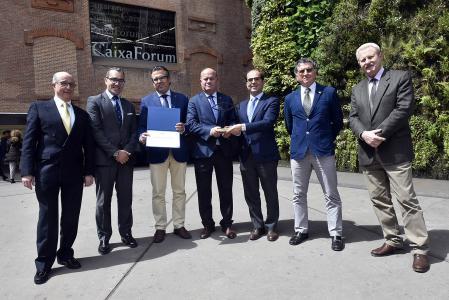 On April 10th, the Mayor of Antequera, Manolo Barón, received the Sustainable City Award in the category of Energy Efficiency from the Secretary of State for the Environment, Hugo Morán.

This distinction recognizes the work and effort of the City Council betting on projects and actions aimed at enhancing environmental sustainability, and makes Antequera one of the most sustainable cities in Spain, and without a doubt the most advanced in terms of energy efficiency.

During the award ceremony held at CaixaForum of Paseo del Prado in Madrid, Manolo Barón congratulated the work developed in recent years by the municipal lighting service together with the UTE ESMAR, participated by SICE. Antequera is placed ahead in energy efficiency, saving up to 64% of energy consumption prior to the lighting changes and reducing more than 1,000 tons of carbon dioxide emission per year. In this regard, the Mayor stated that this type of recognition upraises Antequera "to be at the height of cities such as San Sebastian, Palma de Mallorca, Benidorm or Granada, which have also been awarded."

The event was attended by the President of the Fórum Ambienta Foundation, Ramón Roca; the General Director of Ecoembes, Oscar Martín; the Deputy Mayor for Environment and Energy, Juan Álvarez; and the Manager of the UTE ESMAR Energy Services, Juan Ramón Cortés, among others. This year’s jury was composed of the following entities and institutions: Ministry for Ecological Transition, City Council of Madrid, Regional Government of Andalusia, Generalitat Valenciana, Regional Government of Castile and León and the Government of the Canary Islands.